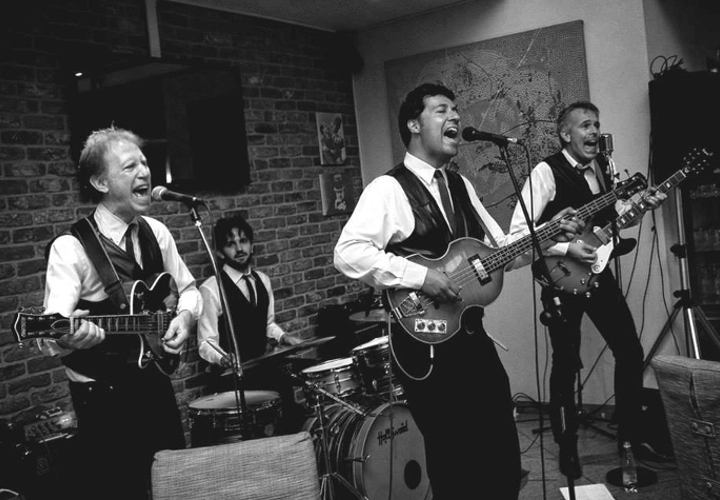 Merseybeat: a musical phenomenon that is generally associated with the Liverpool of the early sixties, and which owes its fame to the storming success of legendary groups from the Merseyside area, including the Beatles, the Searchers, Gerry & The Pacemakers and the Swinging Blue Jeans. The brand of beat music made popular by these artists was notable for its strong melodic content, the use of “call-and-response”-style vocal harmonies, and the influence of other musical genres, including rock ‘n’ roll, rockabilly, R&B, and a drop of country & western. In other words, American music but with a decidedly British flavour, from the good old days when going to a gig meant dancing yourself to exhaustion!

In addition to performing this music in classic “rowdy” 60s fashion, the Beat Barons try to look, play and sound like the bands from that wonderful era. The result is an authentic time machine, where each gig recreates the atmosphere of historic venues of the early sixties, such as the Cavern Club in Liverpool and the Star Club in Hamburg. You can expect to hear material originally made famous by legends such as the Beatles, Chuck Berry, the Shadows and the Everly Brothers, as well as tunes by lesser-known artists (Eugene Church & The Fellows, the Olympics) and even a few Beat Barons originals!

Over the last 12 years, the Beat Barons have played in numerous pubs, clubs and at festivals in various parts of Italy and abroad, rarely failing to get folks jumping! The lineup is that of the classic beat quartet: two guitars, bass and drums, with lead and backing vocals. The individual band members can all boast lengthy experience in other sixties combos from the Milan area.